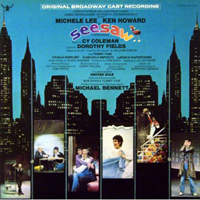 (3 / 5) “Up, down; up, down” goes a lyric in the title tune, and that’s a good barometer for this Cy Coleman-Dorothy Fields musical based on the William Gibson play Two for the Seesaw. First the good news: As the uptight Omaha lawyerJerry Ryan, Ken Howard sings the nicely teasing ballad “You’re a Loveable Lunatic” to his new-found girlfriend, the eccentric Gittel Mosca, played by Michele Lee. When he fully lets loose, Howard has an up-tempo gem in “We’ve Got It.” (Note the joyous Larry Fallon orchestration when Howard says, “Fred Astaire came from Omaha, y’know,” and the marvelous rideout at the end.) Gittel’s numbers aren’t as good, although “Nobody Does It Like Me” is a decent example of those self-deprecating songs that musical theater heroines sometimes sing. As for the bad material: “My City” is not inviting, and “Chapter 54, Number 1909” even less so. When show music buffs discuss the worst songs ever written for Broadway, this score’s “Ride Out the Storm” often comes up. On the other hand, “It’s Not Where You Start, It’s Where You Finish,” performed by Tommy Tune, is not only a good song but also an excellent metaphor for Seesaw, which started out shakily and righted itself only after director/show doctor Michael Bennett joined the team. — Peter Filichia