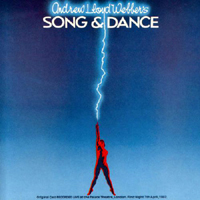 (2 / 5) This two-disc album was recorded live during the show’s opening-night performance, and it has a definite theatrical snap to it. Song & Dance is a unique show comprised of two very different parts — a one-woman song cycle and a ballet — that are only tangentially related. The first act, subtitled “Tell Me on a Sunday” after the best song in the score, concerns Emma, an English girl who goes to New York seeking a career as a hat designer. During her one-hour musical monologue, Marti Webb as Emma makes wry observations about life and men in Manhattan — sometimes expressed through letters written home to her mum, sometimes directly addressed to her unseen boyfriends. With music by Andrew Lloyd Webber and lyrics by Don Black, the Song score has two fine ballads in “Tell Me on a Sunday” and “The Last Man in My Life.” Also affecting is the angry, sarcastic “Take That Look Off Your Face.” Some of the other music sounds like filler, but the lyrics are generally fine, delivered by Webb with conviction. The second half of Song & Dance is subtitled “Variations.” However entertaining the dance may have been onstage, hearing this music on a recording is not quite the same experience as listening to ballet music by Tchaikovsky or Prokofiev. “Unexpected Song” is the most memorable melody in the ballet score, and “Variation 8” is also nice. — Michael Portantiere 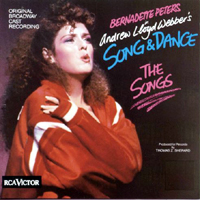 (3 / 5) This album preserves only the songs of Song & Dance. The musical monologue was revised for Broadway by Richard Maltby, Jr., who directed the show and adapted and added lyrics. In this version, we hear about Emma’s involvement with four different men, most significantly  a guy named Joe. In a major addition to the score, Emma sings the beautiful “Unexpected Song,” to a melody originally written for the ballet section of the score, upon falling in love with Joe. The music is so lovely, and the lyrics so well crafted, that this track is the definite highlight of the album. “Nothing Like You I’ve Ever Known” from the London version is also included here, even though it wasn’t in the Broadway show. Bernadette Peters’ British accent as Emma sometimes sounds natural, sometimes studied, but the star is in fine voice, and her performance is sympathetic throughout. On the minus side, the orchestrations sound cheesy, perhaps because they are so poorly recorded and mixed. There’s also some audio distortion of Peters’ voice in “English Girls.” — M.P.