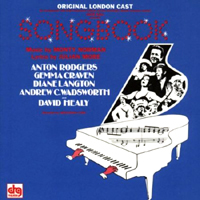 (3 / 5) The centerpiece of this show, a revue of songs written by a fictional Irish-Jewish composer named Moony Shapiro, is a seven-minute medley of “vocal gems” supposedly drawn from Shapiro’s one, long-ago Broadway hit. It’s silly, but it works, and much the same can be said for the rest of Songbook. With music by Monty Norman and lyrics by Julian More, these songs are affectionate, clever pastiche. The result is genial fun, expertly performed. Particularly good are the Gershwin spoof “East River Rhapsody,” the Spike Jones-ish “Nazi Party Pooper,” the terrific ballad “Messages,” and everything sung by Diane Langton. (Note: Under the title The Moony Shapiro Songbook, this show had a one-performance Broadway run in 1981, in a production that featured Judy Kaye, Jeff Goldblum, Tim Jerome, and Gary Beach.) — Seth Christenfeld