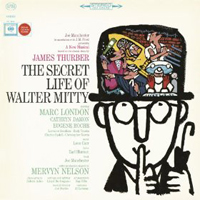 (3 / 5) Based on a popular short story by James Thurber that had already inspired a film starring Danny Kaye, The Secret Life of Walter Mitty — adapted by librettist Joe Manchester — features a score by composer Leon Carr and lyricist Earl Shuman, who have not had a musical produced since. Despite reasonably positive reviews, the production had a short run. Yet this is a score of high quality, filled with inventive melodies and clever lyrics, and the cast is wonderfully talented. In the title role, Marc London conveys an apt nebbishy quality but springs into exuberant life when needed. He excels in “Now That I Am Forty”; “Don’t Forget,” a funny harangue duet with the big-voiced Lorraine Serabian, who plays Walter’s wife; and “Walking With Penninah,” a charm song for Walter and his daughter (Christopher Norris). As Willa de Wisp, Cathryn Damon exudes star quality in “Marriage Is for Old Folks” and in the French-chanteuse fantasy “Fan the Flame.” It’s fun to hear Rue McClanahan share the duet “Two Little Pussycats” with Lette Rehnolds, and there are entertaining numbers for the denizens of the bar where Walter hangs out — especially Eugene Roche’s “Hello, I Love You, Goodbye,” a smug lesson for Walter on how to deal with women. Then there is the first-act-ending “Confidence,” a march in which Walter makes the decision to change his life; if the tune sounds familiar, that’s probably because it’s been used as theme music for many sports telecasts. There are also some recurring themes, a few pleasant ballads, and a happy-ending finale. — Jeffrey Dunn