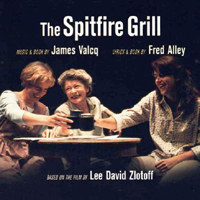 (1 / 5) About a third of the way through The Spitfire Grill, wherein a troubled young woman wanders into a sad Wisconsin hamlet and instills new hope, the sojourner and her local suitor sing the exquisite love song “This Wide Woods.” That number and one other, “Forest for the Trees,” are among the few magnets in this musical. Adapted from Lee David Zlotoff’s 1996 movie of the same title, the show is overly warm and fuzzy. Composer James Valcq and lyricist Fred Alley, who also collaborated on the book, needed to produce a more engaging score than this. For the most part, the ersatz folk tunes are quite tuneless, and too often freighted with rhymed couplets. Worse, the rhymes are not only predictable, but also scant; anytime “town” is sung, “down” nips at its footsteps, and vice versa. One driving ditty, “The Colors of Paradise,” has the characters chanting about how colorful the world has become, yet this chamber piece is almost entirely monochromatic. The cast — including Garrett Long, Phyllis Somerville, Steven Pasquale, and the always-reliable Liz Callaway — is solid, but everyone seems to be performing in shades of brown. — David Finkle