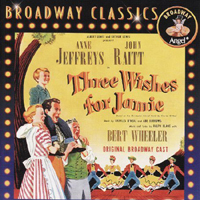 (2 / 5) The singing on this recording of a misfire by Abe Burrows and Ralph Blane is so gorgeous that you’ll forgive Blane’s score for being less than riveting. Based on a Charles O’Neal novel, Three Wishes for Jamie is a nouveau operetta about a romantic Irishman who emigrates to Georgia in 1896, marries the girl of his dreams, and adopts a Gaelic-speaking son; those, after all, are his three wishes. Fortunately, the Irishman is John Raitt, and as soon as his voice soars above the staff in “The Girl That I Court in My Mind,” you know that this cast album will be more than listenable. Anne Jeffreys, in splendid voice, has even better chances: a lazy ballad titled “My Home’s a Highway,” and a sad soliloquy with intriguing harmonies, “What Do I Know?” Also on hand are Charlotte Rae as a frump, delicious in a showy piece of special material, and Bert Wheeler, who’s rather tiresome here. Working minus Hugh Martin, Blane produced pedestrian lyrics but often lilting music, especially as orchestrated by Robert Russell Bennett. The Irish blarney gets pretty thick, the story hasn’t much fire, and songs like “It’s a Wishing World” are time-passers. But as long as Raitt and Jeffreys are singing, it all passes pleasantly. — Marc Miller